“I wake up on a Saturday afternoon with a bad hangover wondering what to do?” Such remarks annoy me greatly. I can’t understand people who don’t know what to do with their time on weekend. The idea is totally alien to me. I wish there was same way I could siphon out the time from their lives into mine – could do so much more as there are just so many things to do and only 24 hours in a day!!!

Take just this weekend for example – started with a strenuous session of Kalari on Friday evening leaving me soaking wet, no not coz of a monsoon shower but due to the sheer workout!!! I come back home and plan the weekend squeezing in as many things as possible. I lose a lot of time currently training for a byking trip (read cycling for byking thru out) from Manali to Leh or shopping for it. So this time we had the choice of going to Nandi and do a typical climb or…
A friend asked if we were interested in visiting this farm near Shravandurga in Arakamanahalli (dang the names are tough!!!). We thought we could byke to this place instead and we did. Started off at 5ish (lacking sleep) and went from the beginning of Magadi road – about 47kms from Kormangala I was told. The stretch in city is boring and once u get out it is serene lined with beautiful trees on both sides – hoping BBMP doesn’t see the need to widen roads that far… I was horrified at the look of cubbon road – one of my favorite stretches. U shud take a look from some higher floors of Manipal center – all gone now!!!
Anyways we reached the place and met up with Shekhar who has an interesting story to share. He was with HP Labs before retiring recently. On one of his visits to Shravandurga he parked his vehicle near a farmer’s house. They took some unknown path and returned only by evening. On their return the farmer offered food and insisted they have it. He wanted to pay them for it but they wouldn’t take anything – atithi devo bhava! 🙂 He told he would be back in which case and they would have to feed him each time. They were only happy to do so. He kept visiting the place and got to know more about them. One trip he noticed their son was missing. They told he has taken up a job in the city to help clear the loan. Shekhar was surprised to know that the amount was a meager 20K loan and the farmer was merely paying the interest with all their earnings. Why so? the interest was 5% per MONTH!!! He was shocked at this ridiculously exploitation. He told he will clear the loan for them. They wouldn’t accept so he told he can use a piece of their land to make a simple home for him. This they agreed to and he got a piece of land that wasn’t fertile with a rock. The house he has is amazingly simple much better than a farmhouse thing I saw in the previous week. All this was done with no paper work. Today the farmer is out of debt making a good life for himself and helping other farmers. Shekhar continues to help them and has himself bought a piece of land to grow trees and encourage organic farming practices.
Shekhar thinks that what he did is simple and scalable. Others could follow suite. The next adoption is already in progress.
What are the many possibilities?
1. Fair trade options: He says that these farmers need to travel to city and sell the vegetables where they get auctioned. It would be good to have a fair trade mechanism whereby only transport expense is part of the sale and most of the profit comes to the farmer.
2. Encourage best practices: I was intrigued by the drip irrigation, rain water harvesting, bio gas generation, etc at the place. He said the tomatoes yield could be increased if they were spaced out better – less plants more yield. This only gets more interesting…
3. Supply of organic manure: The farmers are not as ignorant. You go and ask them for any gobar they refuse as they can simply dump it on the land knowing it is good manure. Shekhar told it would be great if we can get organic waste from cities and provide it to the farmers. Probably the same truck carrying the organic stuff can take back their fresh vegetables if the hygiene is taken care of – meaning the wet waste brought from city should not be rotting…
4. Clearing the loans: Clearly the interest rates here are exorbitant excoriating the farmers. It would be good to have some tie with an org like RandDe to ensure the loans of these farmers are migrated to RangDe like institutions which have as low as 16% interest annually as compared to 24% provided by other MFIs. I was coincidentally wearing a tee from RangDe. It feels good when u see the pieces of a puzzle fall in place! (:
5. Insurance against crop failure: This could be a part of the adoption mentioned earlier or a tie up with people in city willing to secure some farmers. In return the city folks can use the land for respite without investing a huge chunk of their savings. This option can appeal to many.
6. Need for milch cow: Shekhar said he wishes to equip the family with a few more cows so that the gobar can be used to generate electricity and the milk could be used in the family. Need to check with Jain farms in Bangalore if they can supply such cows as most of the cows there are rescued from butcher houses as they are old and unproductive. At least we could get the gobar feeding these cows wet waste from near by localities. Could be a win win for all.
The possibilities are many and doable. If only…
For us the weekend began with a talk with such an inspiring person and it is not the end of it.
We helped pick the tomatoes and did it at least for a third of the field. Felt great and again the possibilities of making it efficient. Shekhar devised a bike (trike actually – tricycle) to transport water. Again why re-invent wheel err drum – http://ngopost.org/story/rollable-water-container. 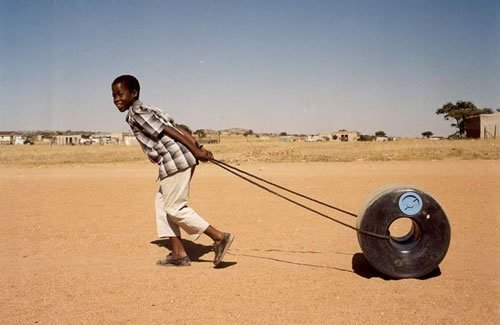 A good idea begets another idea – a neat animation from google contest.

This was followed by a sumptuous breakfast – with raagi mudde involved I would call it heavy lunch rather – very tasty pickle grown locally – bitter lime or something. I m always loving it! 😀
We decided to hitch a ride. I wanted to byke back and do the beautiful climbs but let it pass due to time constraints. Returned to the city and helped a friend pick a good high end byke. She is a strong byker lugging aournd a 30+ kilo byke currently. Then a tryst with the monsoon shower which is becoming a rarity – an inconvenience to us city dwellers a night mare for farmers!
Again spoilt for choice in the evening – a play by Indian Ensemble, film screenings by Maraa – around a tree, etc. I had to buy a helmet so skipped the plays and ended up watching Raavan – a bad bad choice. People should realize there are many wonderful plays running with limited audience who are wasting their time in movies such as this!!!
Sunday – skipped training went for a tree plantation drive – my first. Love this group as they are focused on preserving the plants. It was good to see some residents come early on lazy Sunday morning and pick up the tools and get to work. It took me a lot of effort as I am new to this but enjoyed thoroughly – was a work out for the upper body. Those morons going to gym and pumping iron should actually think of doing something more useful!!! The average Indian is usually a laborer and with great physique due to the hard work with limited meals – the best way to stay fit – a need for most IT professionals trying to sweat it out in air conditioned gyms! 🙂
The next thing – well deserved – yummy tatte idlis in Domlur (u must try if u haven’t) – some vishnu … We then visit this plot given for our zero waste management efforts. Wet waste appears to be a big problem most places so we hope to use this piece of land and take care of that while apartments take care of their dry waste. We plan to plant a good number of bamboo saplings that can cover the activity as people find it an eye sore that someone takes care of their waste and pretty well at that! 🙂 These hopefully can be used for making composting tanks if there is a need to clear the land.
The next thing is a play reading at Bangalore Little Theaters workshop – SPOT (Summer Project on Theater). Amazing improvement in the script and creativity at its best. Really enjoyed the next few hours. One should not while away their after noons when there is such fun stuff happening around!!!
Evening was spent shopping again for the trip – wonder how the weekend would be without the over head of the trip n shopping! 🙂
A pretty eventful weekend nevertheless with a great dinner at a nice punjabi dhaba – “Kaaku da Dhaba” on Sarjapur road near Wipro Head office. The week again begins – look forward to the Kalari class in the evening. Will go for a swim if I find time – if only I had more time… :)) So next time I am around don’t u dare say – “What do I do with my time?” I might just wring your neck!!!
0
Shares