Some things to ponder about –

Population of spain
– 2010 estimate 46,030,109[1] (27th)
– Density 93/km2 (106th)
231/sq mi
Population of India
– 2011 census 1,210,193,422[8] (2nd)
– Density 365.5/km2 (31st)
946.6/sq mi
Anything we do be it Holi or Tomatino we need to be aware that the resources we use are going to be limited. What some others possibly can afford – probably we can’t.
Why are we having the festival? Somebody can make money – will they be buying the tomatoes from farmers at a fair price or will it be another profit making venture where costs will be cut at any cost? 🙂
Will they organize this event responsibly?
What happens after the event to the tomatoes – composted or wasted?
Point to those against the ban favoring democracy (are we really? Is it not a money making venture end of the day? Might as well sell dope/sex legally? Why is burning currency illegal?) 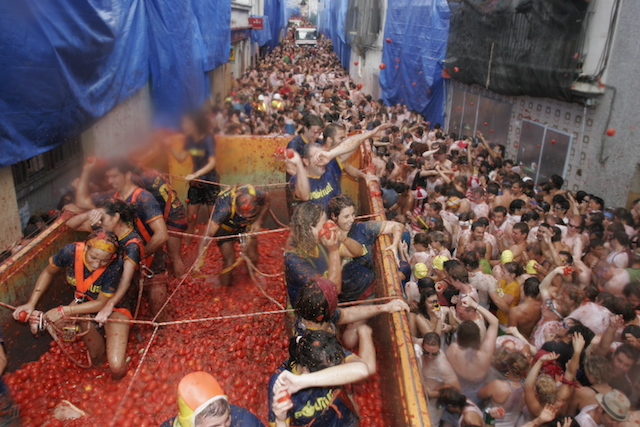 By Carlesboveserral (Own work) [CC BY-SA 4.0 (http://creativecommons.org/licenses/by-sa/4.0)], via Wikimedia Commons

Point to those requesting for a ban – please retain this energy when Holi comes around and million other things that lead to wastage! 🙂

The trouble is it becomes a nice money making venture we will have more of it as it we don’t have enuf of such things already – ganesha festival for example.

What is my take – no take – might as well do something more fruitful! And yes I will stay away from any such ‘celebration’! :))
PS: I do celebrate Holi moving to natural colors slowly and using the same pair of clothes or those that are torn out – trying to reduce the amount of water used but yes it is scary (rather scarier) that it has a scale much larger than La Tomatino and nobody will notice loss of water like loss of food – water being a more important resource!!!
PS2: Here is another read about the festival being celebrated in Lahore –
La Tomatina festival in Lahore: Can we afford to do this?